Is Digital Experience the Way we Launch Products to Market in 2020 and Beyond? 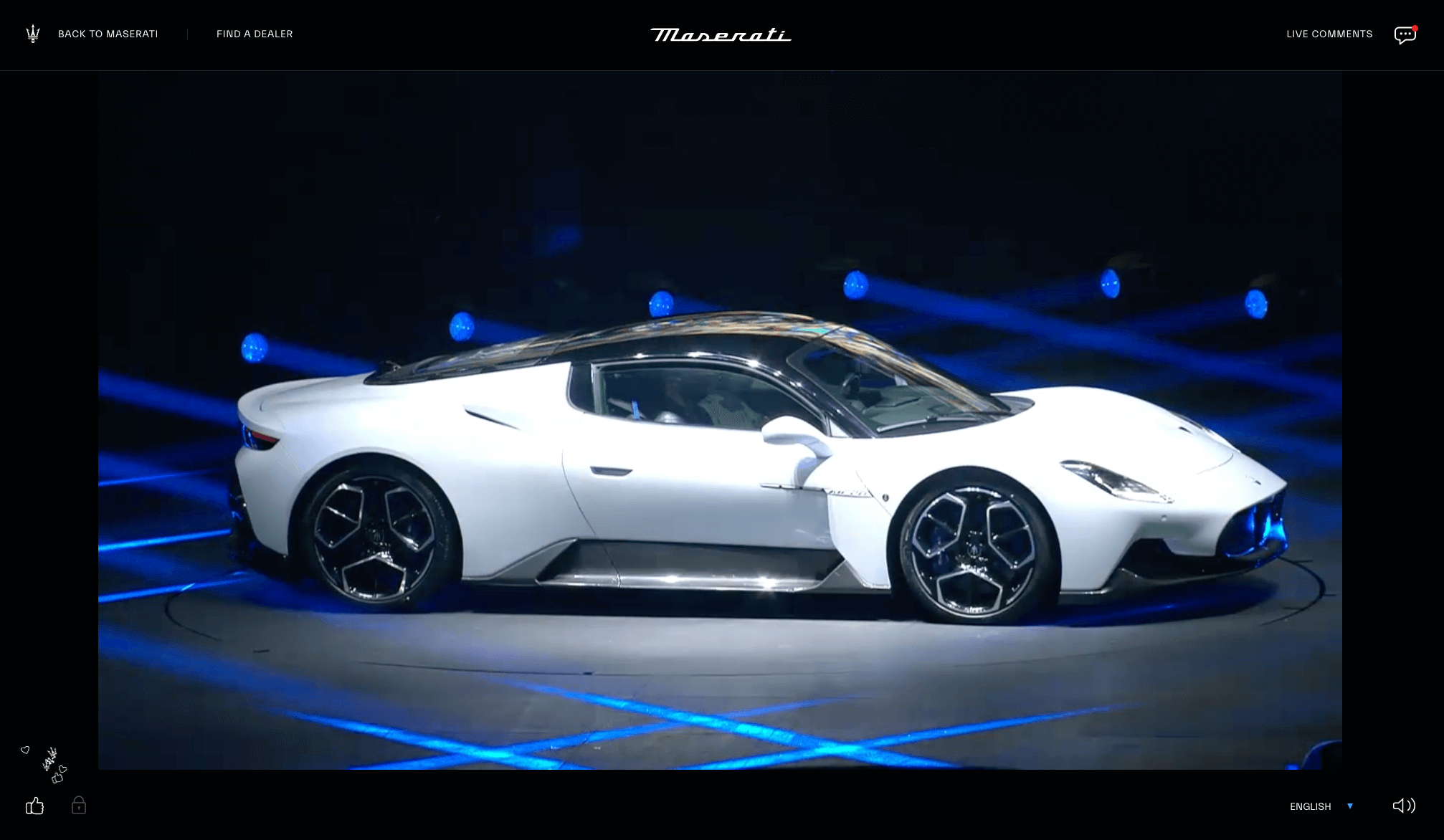 Whilst lots of automotive launches have either been cancelled or postponed this year, those that have gone ahead have been forced to rethink the traditional format due to Covid-19. As a certain Greek philosopher famously said, “necessity is the mother of invention”; and as such manufacturers have found a way, by turning to technology and digital media to make their announcements.

For lots of manufacturers this is new territory, and some have fared better than others; however, those who have been most successful have enjoyed a very positive response, whilst being able to access a much wider reach of target audience leading to increased visibility often for less investment. As barriers to digital communications continue to fall, the question is, will manufacturers want to return to the traditional launch – even after the pandemic?

Billed as an ‘immersive and interactive launch experience’, WDA recently took part in the online launch of the new Maserati MC20. From the outset the Maserati team had created a real buzz for the imminent release of this one of a kind supercar, attracting the attention of the online communities with the announcement that the launch would be projected onto global city landmarks. 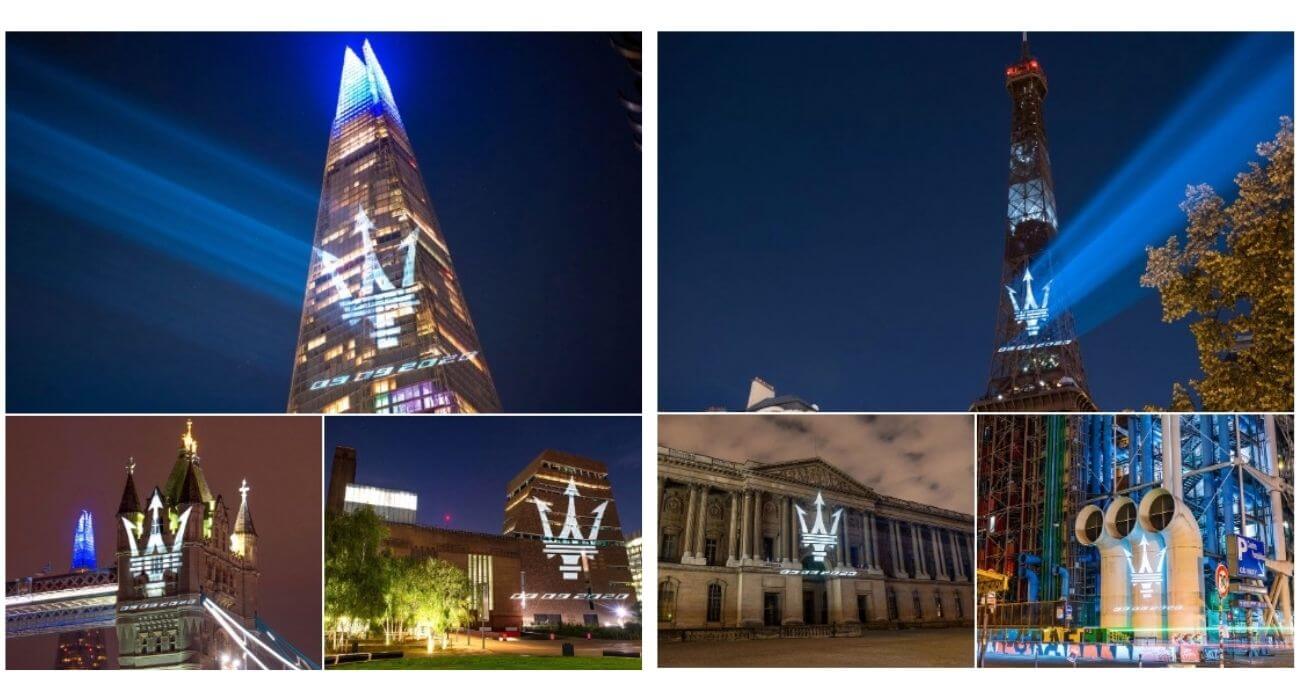 When we logged in to register on the morning of the event there were already 500 people online globally with still over 5 hours left to go until launch. A nice touch was that everyone that logged on got a mention at the bottom of the screen – the total number of attendees hitting 10,000 when the launch went live. 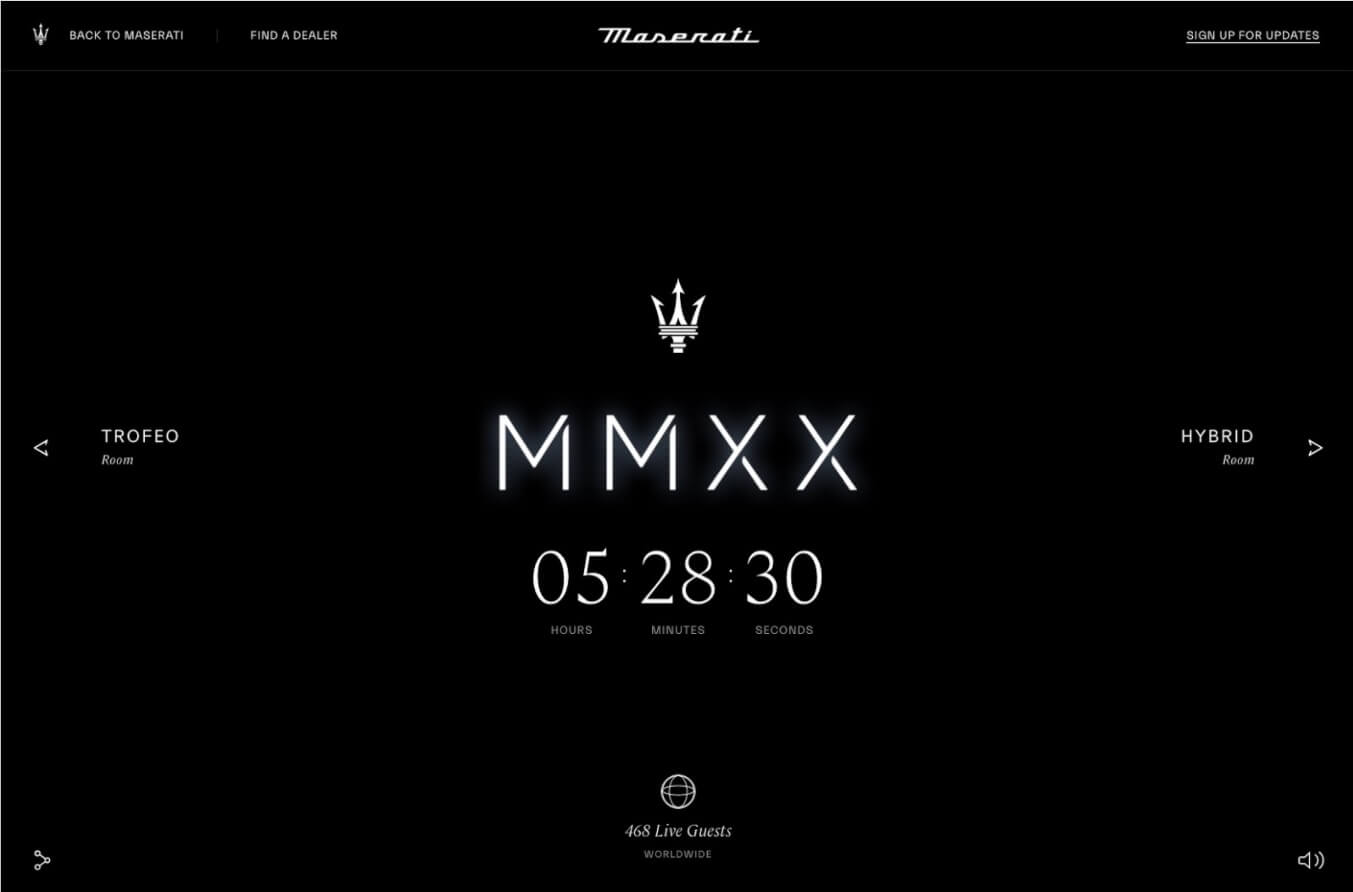 After a short introduction from MrJWW we were initially treated to a shot of an empty auditorium followed by a pan around reveal of over 40 Maserati cars from classics to modern in the VIP guest section. All of the vehicles were facing a 4 story high screen – it was like a drive-in theatre. At this point, the chat feed went live and was immediately on fire with viewers demanding to see and hear the new car! We were then all caught up in a fast paced A-Z of Maserati, through history, customisation and motorsport successes. We were also treated to a brief glimpse of the new SUV that will be making an appearance next year. 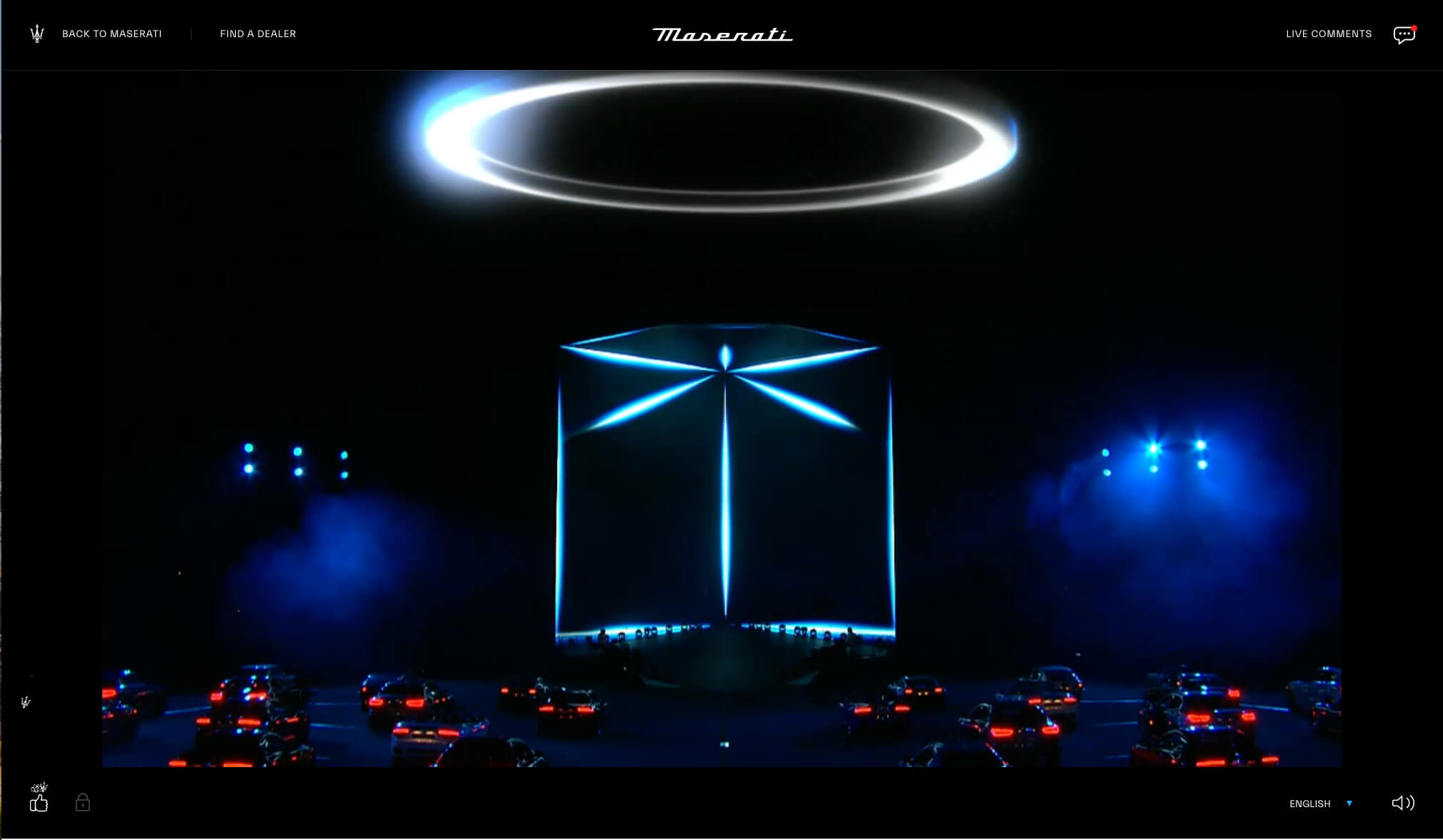 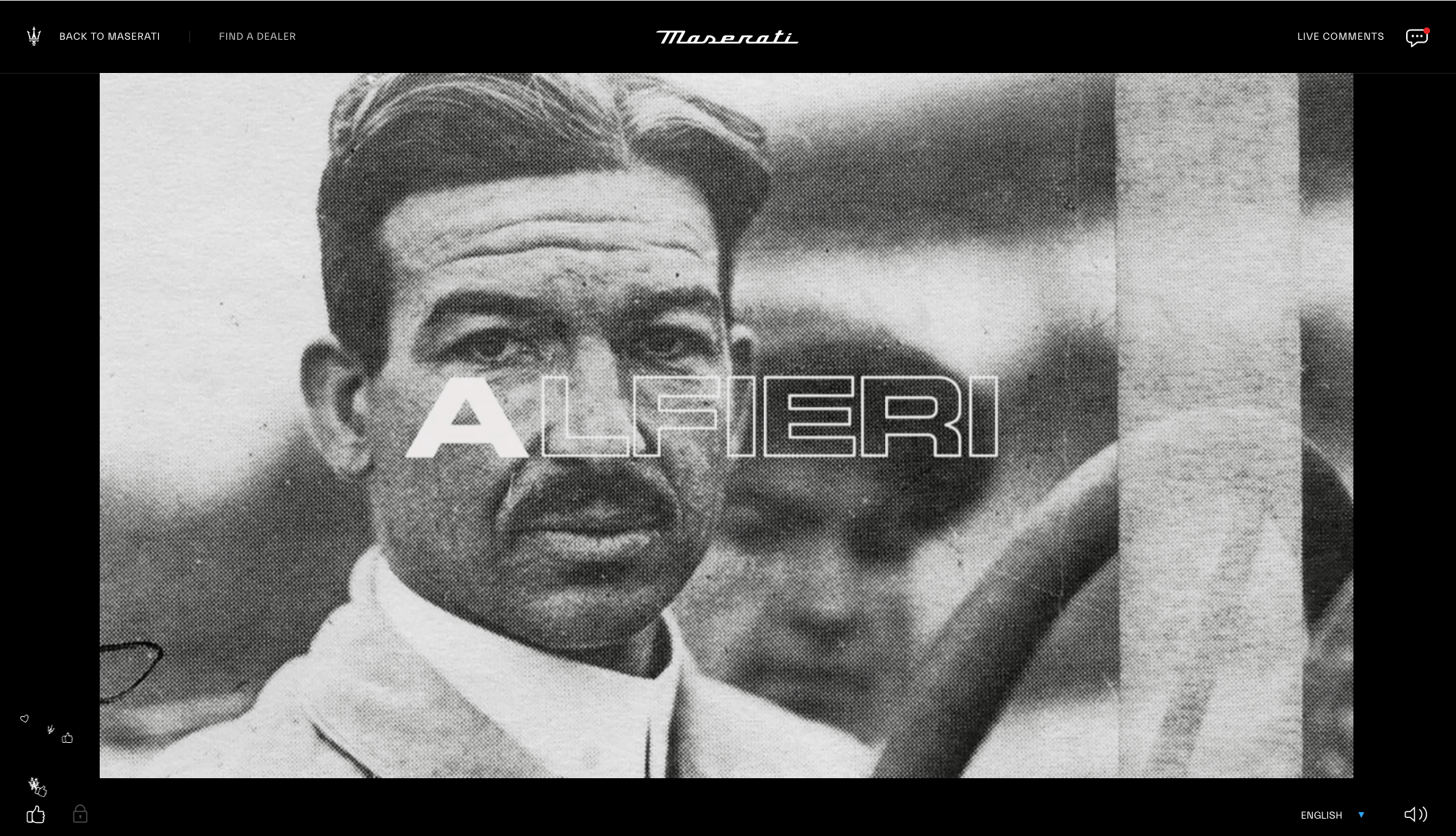 Suddenly, the stunning MC20 arrived on stage driven through the sea of VIP guests in their Maserati’s before the main presentation and an opportunity to discover why this car really is one of a kind. Billed as a race car for the road, the MC20’s powertrain and aerodynamics are the result of some truly innovative engineering. Not least because Maserati claims 97 percent of the car’s development was done in the virtual world. Even the suspension was tuned using computer simulations with test runs conducted on a virtual road. Even more impressively, Maserati engineers claim that their digital modelling was so accurate that the physical prototype car performed and handled in exactly the way they’d set it up in the simulator.

Finally, in what was a truly wonderful display of passion and appreciation, Maserati CEO Davide Grasso spoke about sharing the experience with Maserati employees on stage and how proud the team are that the MC20 is 100% sourced and built from where it originated – Modena. “Today, with the MC20, we are introducing more than a new supercar. We are setting the cornerstone to build the Maserati of the future” said Davide. 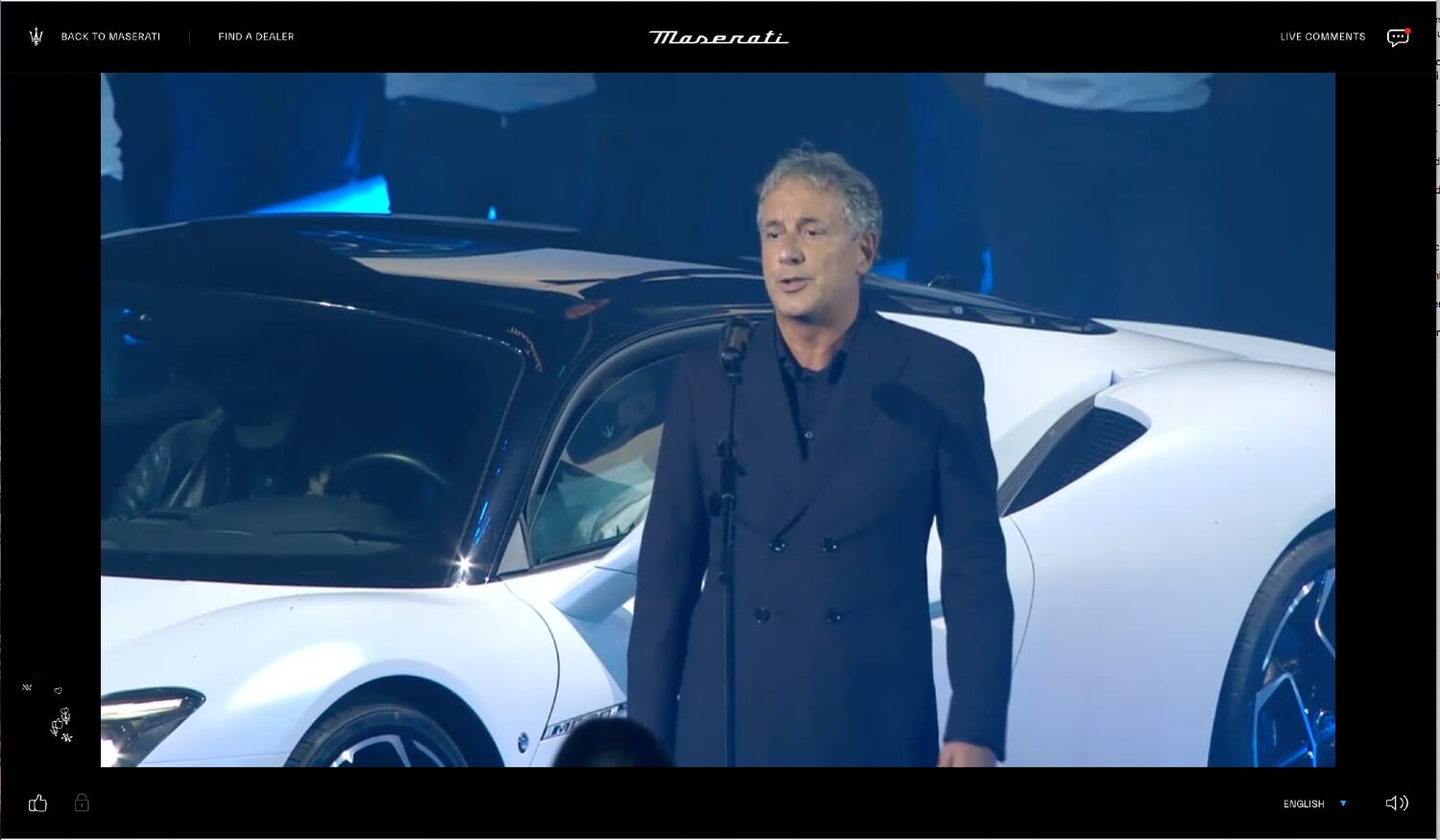 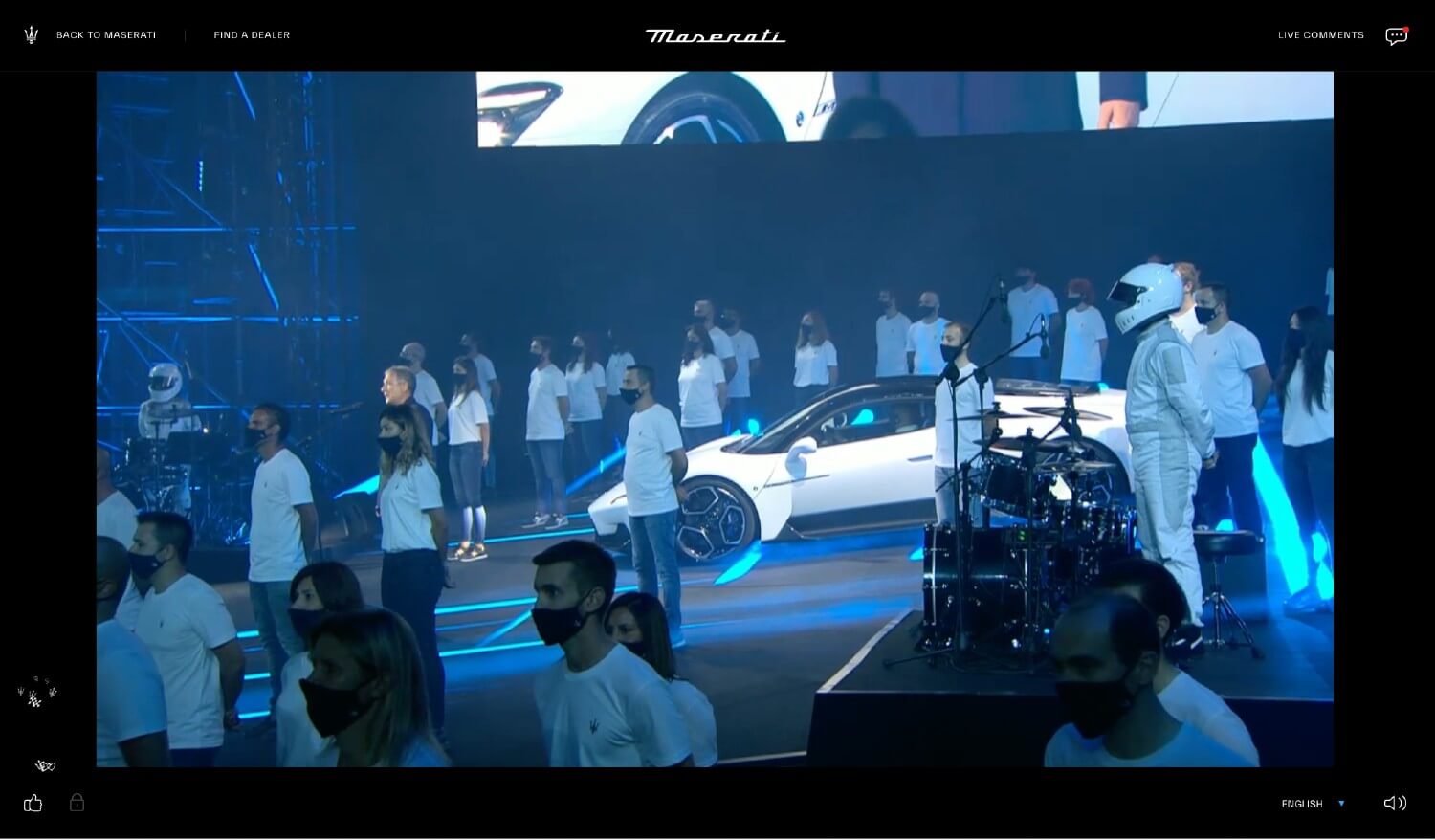 Being second globally to comment on the live feed about the concept of the launch and the all round atmosphere was great but being the first to celebrate and join in the commendations on LinkedIn (out of over 200 so far) gave us such insight to the brand loyal fans and lovers of Maserati. Sometimes social media feeds are telling and this feed was all admiration. Well done Team Maserati!

Overall, we were very impressed with the MC20 launch. The build up across global social media channels was effective and very well thought out, and the overall launch concept and creative use of graphics, videos and music were second to none on the night. We feel Maserati has set the bar for digital launches and we believe that these types of events are definitely here to stay!

For more technical details and specifications of the new MC20 please see: https://www.maserati.com/qa/en/models/mc20

And also check out: Houseof.maserati.com – a joy to spend some time on!