“Lemon’s, Volkswagen’s. Always have been” 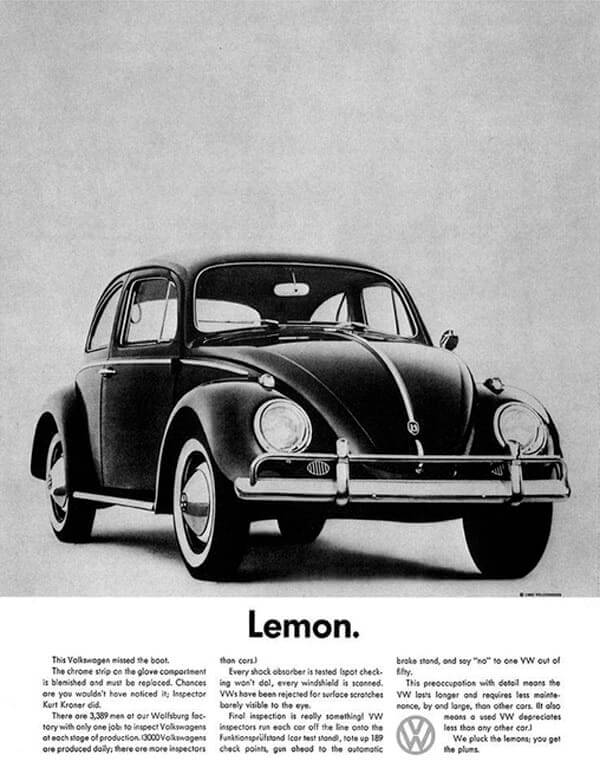 Actually ‘Lemon’ is a classic VW advert created in a time when their ‘think small’ campaign was voted best of all time by Ad Age, (and even referenced by Don Draper in Mad Men!)

Their unconventional advertising campaigns which turned seeming faults into benefits was a major hit. It was these early campaigns that laid the foundations of VW’s reputation for quality, reliability and trustworthiness. Brand values the car buying public would NEVER question.

By now we’re all familiar with the story. VW employee raises concern that software may ‘infringe legislation’ back in 2011. Then last years tests revealing certain models were emitting up to 40 times the legal limit of nitrogen oxide, ultimately leading to a dramatic confession that it deliberately installed the cheating software.

Shares went into free-fall (the company losing $22 billion in two days), CEO Martin Winterkorn resigned and various global sales bans have been imposed on VW diesels. Credit Suisse latest estimate suggests the scandal could cost up to $78 billion, which will eclipse BP’s losses relating to the 2010 Gulf of Mexico disaster.

As branding experts with a sister company specialising solely within the automotive sector, the marketing aspect of this story holds particular interest.

Not least because of our recent high profile re-branding of ‘Mer’ car care. The significance being the Germanic repositioning solution we created, shaped in part due to the extensive focus group research we conducted, which evidenced loud and clear that German automotive manufacture was a highly desirable thing; ‘Made in Germany’ being synonymous with authority, reliability, excellence and trust.

Of course, VW’s cars are still well built, drive well, and are reliable (although our Marketing Director is definitely looking slightly less smug in his Passat these days), so beyond the current catastrophic financial implications related to recalls and lawsuits, does brand really matter?

The short answer is ‘absolutely’. From a branding perspective, your car defines your identity publicly. But then in today’s brand driven world, so do most brands you build your life around.

Like lots of those other brands, VW’s brand represented a distinct market advantage to the consumer. In the super competitive automotive market lots of the claimed ‘product advantages’ could actually be obtained elsewhere – Kia, Ford, Honda… but only a VW is a VW. If you wanted your car to say all those things VW had come to represent, about you, there was only one choice.

Over in Wolfsburg, The marketing people have of course gone ‘DEFCON 1’ attempting a coordinated damage limitation exercise across its sprawling multi channel media machine.

However, VW has arguably missed the window of opportunity to lead the conversation. In a crisis situation like this the brand responsible should take ownership of the issue immediately and become a hub for information. During the time elapsed since the scandal broke, there seems a distinct lack of consistent commentary.

Notwithstanding their speed of reaction, VW must now totally rethink what they stand for – then critically how they can get the consumer to believe they’re not lemons for buying a Volkswagen.